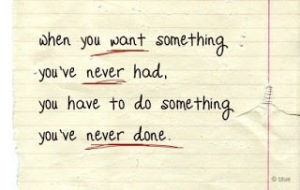 Last week when I awoke, it was one degree outside.  When I came home, some 13 hours later and as I opened my car door and stepped out, it felt wonderful and much warmer.  It really did.  I checked my cell phone and was surprised to read it was only 14 degrees.   What?  That’s all?  The something we deal with wherever we are is getting through our day the best we can by being resilient.

Snow fell this week in Vietnam; it caused a traffic jam, not primarily because of the weather.  Many people who had never seen snow drove to see where it fell.  Snow fell over the Middle East as well.  A Jordanian Prince joined other people to help a motorist out of a snow bank.  Below is a Picasso image of resilience that the editor(s) of http://www.essentiallifeskills.net/   chose to represent resilience.  What do you think?

When we are at our workplace, the SOMETHING we deal with  usually comes up when an emotional response takes place.    [Should I take a moment and manage my emotions before speaking to anyone else?]   How did this happen?  What’s the first response to our staff?  What information do we need that we don’t as yet have?  What must we address right now, later today or tomorrow?   How am I dealing with the element of survival at this moment?  What can I do that I haven’t done before to control myself, and remain aware of what’s going on to assist other people?

As you choose Who You Want to be Known As this week, when YOU deal with that SOMETHING, consider this – – –

I hope you Shine brightly, whatever your activity this week.

Note:  The images shown in this blog post were allowed to be copied and pasted from Google Images.

Member of The Boss Whispering Institute (2015). March, 2018, Certified Practitioner Marshall Goldsmith Global Leadership Assessment. June, 2019 Marshall Goldsmith Stakeholder Centered Coaching Certificate. June, 2019 Marshall Goldsmith Team Stakeholder Centered Coaching Certificate. As a Certified Professional Coach she specializes in working with individuals facing challenges in their careers, decision making and self-development. As a highly-trained listener, Jo Ann embraces a model of empathy, trust and honesty in client interactions. Her gift is in enabling her clients to tap into their own personal strengths, form mantras that spark achievement and advancement, and give them freedom to operate within their own core of central beliefs. Bound by a rock-solid ethic, and grounded in spirituality, Jo Ann brings a wealth of corporate experience to her coaching practice. "In coaching," explains Jo Ann, "the pronoun 'we' is powerful because the work is a true partnership. Without that mutual trust, the client cannot drive outcomes."